Sergio Cuan is a bonsai magician. He can make branches seemingly appear from nowhere -– over the course of a number of years, that is. A visual artist who graduated with a BFA in Art and Design from Pratt Institute in Brooklyn, NY, Sergio became fascinated with bonsai as an art form. Over the years he has transformed many pre-bonsai into works of art, but he really likes to work with deciduous trees. He creates such tight ramification that his maple trees sometimes look better with no foliage than with foliage. Mine often do too, though for different reasons, as in the leaves are all crisp and brown. In a presentation that lasted almost two hours, Sergio showed many examples of trees in various stages of development, explaining his thought process for the final tree as he went along. Here are a few examples including some not-so-great screen shots I took during his presentation. 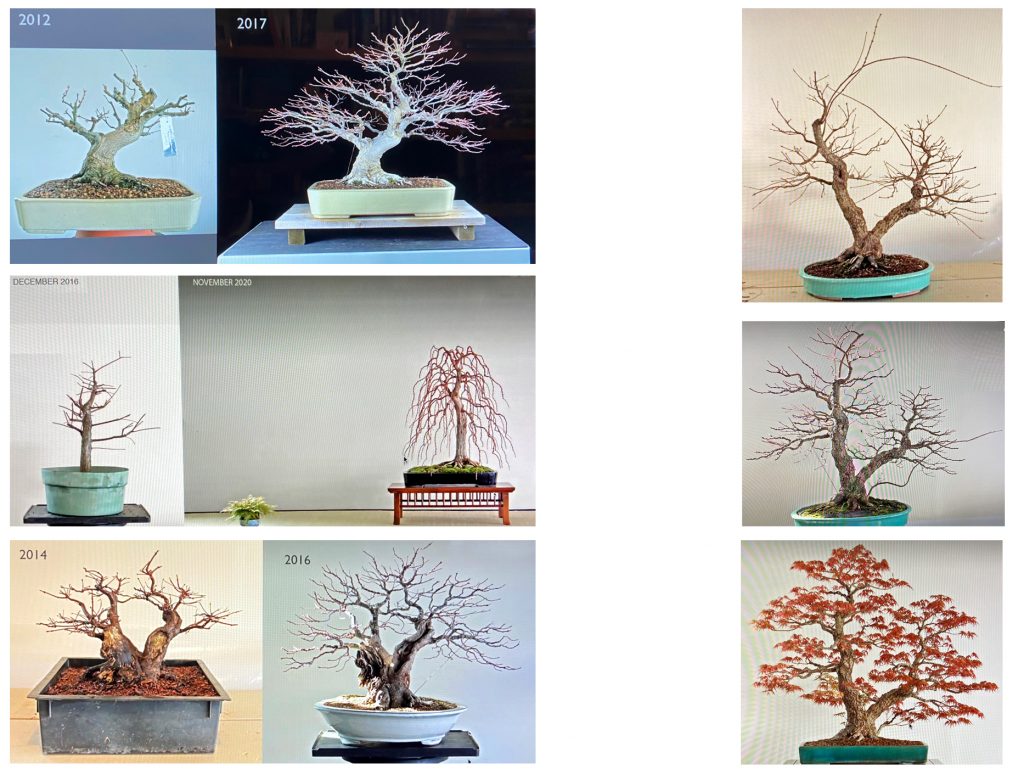 Sergio bought this Kashima (dwarf Japanese) Maple (top left) but when it was shipped to him, the apex was broken. He cut off the stub and grew a new apex. He also wired all the branches, and defoliated it several times to get better ramification.

Sergio Liked this Bald Cypress (middle left) because it was smaller and more compact than most he had seen. After putting his efforts into growing a stronger apex and main branching, he decided to make it into a weeping design.

As he often does, Sergio decided he liked the back of this tree better than the original front (bottom left). But it had some big cuts. So he worked the left one into a design feature and hollowed out the right trunk. He also turned it slightly and built the ramification.

The Arakawa Maple (top right) is known for it’s rough bark. Sergio grew some whips and did some grafting


He did a root graft ( middle right) on the lower right and decided he liked it as a mini third trunk.


The finished (if they ever really are) maple in full bloom (bottom right). This species comes out red in the spring.

I am about to jump into my Honda Element, which is chock full of bonsai, and drive up to St. Helens, Oregon, for 3 days of classes with Ryan Neil at Bonsai Mirai.  When I started going to Mirai 3 years ago, it was like going to the Disneyland of Bonsai and I’m 8 years old.  It still is (and I’m still 8, by the way…).

I also have the extra secret double bonus of seeing 2 of my 4 kids when I go to Mirai because they work there now.  My daughter Eve started out as a video production intern at Mirai in 2018. She is now Mirai’s project manager and you might recognize her voice as the moderator of the “Mirai Live” online teaching videos.  In the next few months she will be the new student in Mirai’s beginner series videos on their YouTube Channel. Her younger brother Nico is currently the business intern at Mirai. He started last summer and has continued to work part-time while taking his UC-Riverside classes online. I am very proud of both of them, their work, and their newfound interest in the art of bonsai.

Eve has participated in two recent, important, and thought-provoking editions of Mirai’s “Asymmetry” podcast that I would like to call your attention to. In July 2020, Eve served as a cohost of the “Women in Bonsai” podcast which was an introspective look into the gender disparity in bonsai practice.  More recently Eve was the guest host of the “World War Bonsai: Remembrance & Resilience” episode about the current exhibit of the same name on display at the Pacific Bonsai Museum.  As guest host, Eve interviewed Pacific Bonsai Museum curator Aarin Packard and journalist-turned-researcher Nancy Ukai, who is the director of the digital project “50 Objects/Stories: The American Japanese Incarceration.”  This podcast goes deep into exploring the origins of bonsai in the US through the tragic stories of Japanese Americans who were victims of manifested systemic racism and subsequently incarcerated in concentration camps the western US during World War II. It was a very moving and meaningful discussion and review of “World War Bonsai: Remembrance & Resilience” exhibit. Give it a listen. Links to both podcasts can be found on Mirai’s “Asymmetry” podcast website or by finding Mirai’s “Asymmetry” podcast on your preferred listening platform (Apple Podcasts, Sticher, Spotify, Beanpod, etc.).

My hope is that May’s online meeting can function similar to the way we have used our in-person roundtable tree critiques. We changed the name to “Tree Improvement with Q&A” in an effort to make the process of sharing our trees a little less scary. We’d also like to use a portion of the meeting to address any bonsai-related questions from new or existing members. We likely won’t reach a single answer for every question, but I’ve found it can be helpful to learn what others are doing in the quest to figure out what works best for me and on my trees. You can email me pictures or videos that I can screen share during the meeting to make it run more smoothly. It would be great if you are also able to get the tree on camera during the meeting, but if not, we can work off the pictures or video. Ernie will also send out an email link to the Club’s Google Drive where you can upload any pictures or video that are too large for email. You should be able to just drag and drop files from your computer to the folder opened by the link. From a smartphone, you can click on the “plus” in the bottom right of the screen that opens when you click the link. From there you can upload pictures or videos that you already have on your phone or you can take new ones that will load directly to the folder. One tip from the smartphone is to organize your photos by making them “favorites” or putting them in a special album to make them easier to find during the upload. If you can put your name in the picture or video file uploaded from the computer it will help in the organization, otherwise just send me an email with a quick description of the tree you uploaded and I can figure it out. I hope we can get some good participation and a lively discussion. I also encourage everyone to check out the website (www.bonsaitonight.com) of our June presenter, Jonas Dupuich. He will be discussing development and refinement techniques on Japanese Black Pine. He also has numerous articles with great pictures on many aspects of bonsai development, refinement, design, and horticulture (https://bonsaitonight.com/recent/). 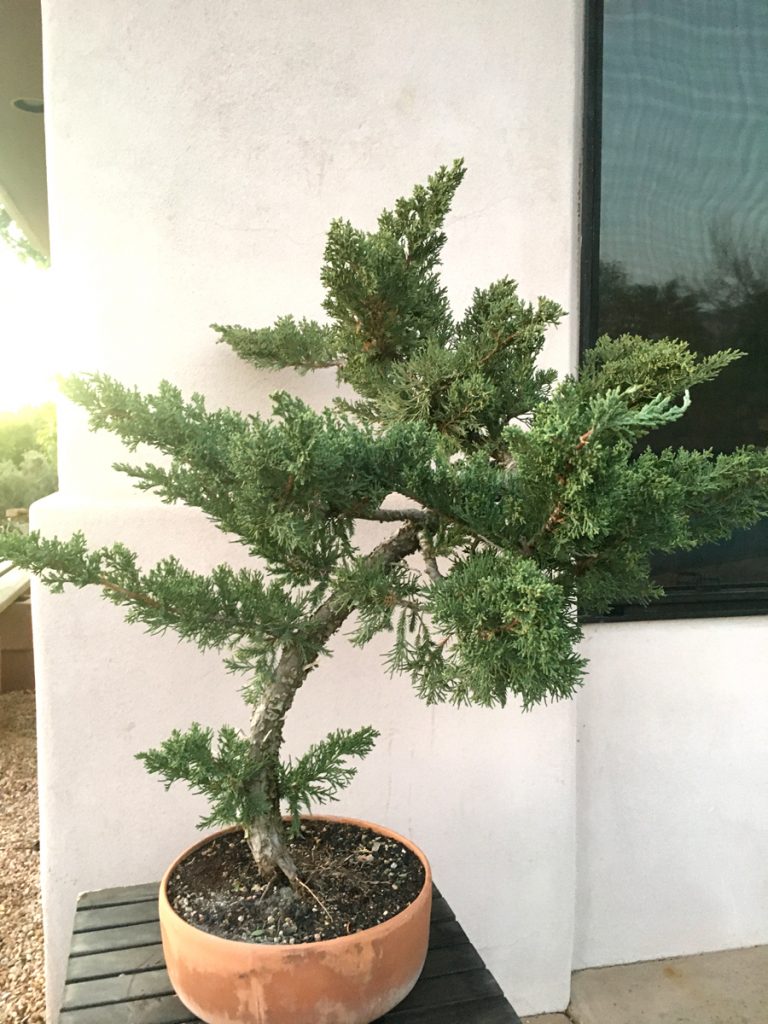 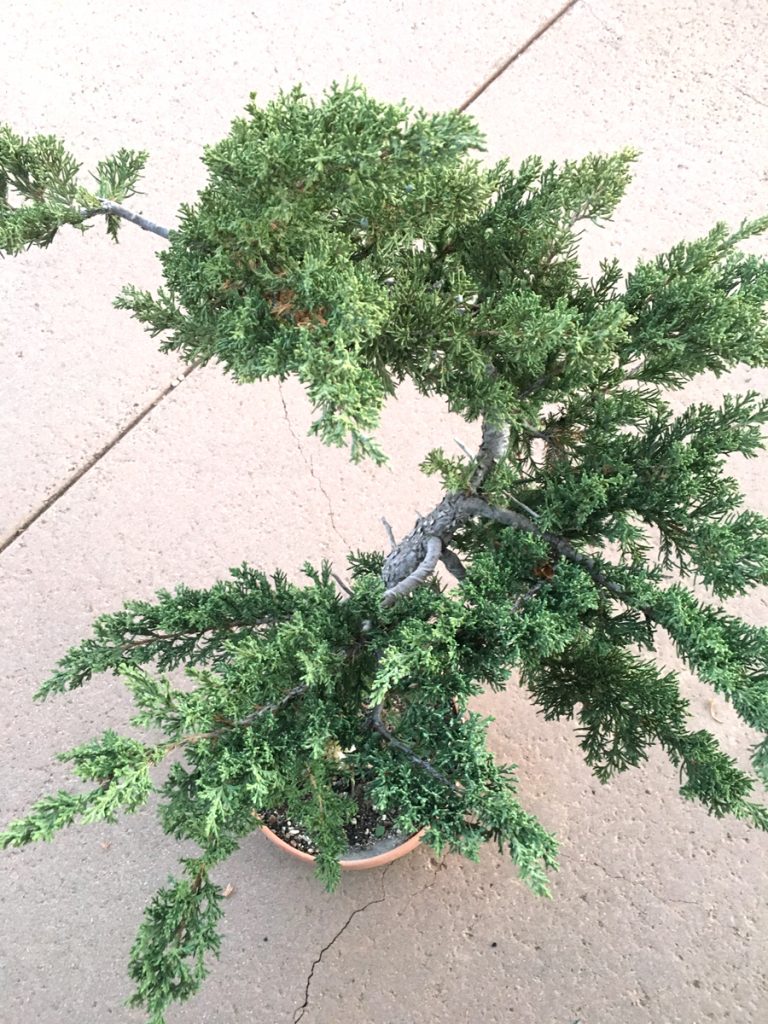 Sample photos of  (Jeff’s) trees that need some help

This double trunk juniper prostrata was started as a cutting and planted in the ground for about eight years before it was dug up to be trained as a bonsai.

The first photo was taken at our 1981 annual show by Leroy Kubel. The second photo was from our 2005 annual show. 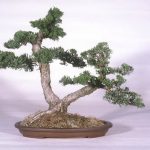 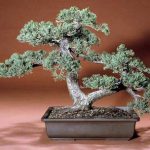 Today the height including the pot is 27 inches and is 32 inches in width (third photo). The diameter of the trunk just below the split is 3.5 inches. For some reason, bonsai of this size seem to be getting heavier every day for this old man. The foliage, at least to me, seems to be okay with this size of juniper prostrata. 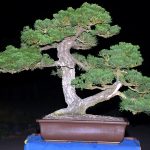 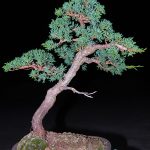 If the trunk is one and half inch diameter or smaller, the foliage does not look proportional with the exception if it’s styled as a tall bunjin style. So I lean towards grafting shimpaku foliage to small diameter juniper prostratas. The trunk of this air layered prostrata juniper (right) with grafted Kyushu shimpaku foliage is 1.25 inches in diameter.    Wally