The only thing longer than Jeff’s last name is how long he has been doing bonsai. He started in 1992 when he lived in Boulder, Colorado. Unfortunately, he has had to restart his collection a few times due to international moves and a failed attempt to grow trees in Tucson, Arizona without a humidified greenhouse. His current collection includes several alpine species such as Ponderosa Pine, Colorado Blue Spruce and Rocky Mountain Junipers from his most recent stint in Boulder. The pines and spruces have required wintering in colder climes, so as a student of Ryan Neil at Bonsai Mirai in St. Helens, OR, Jeff keeps some of his trees at Mirai, especially the ponderosas which he is grafting with Japanese Black Pine so that they will acclimatize to our mild Santa Barbara winters.

Jeff will talk about the major improvements he has made as a bonsai practitioner since studying with Ryan Neil for the last 2 years. He will present information on the courses available at Mirai, but more importantly, the on-line learning platform Ryan has created through the Mirai website and on Mirai’s YouTube channel which is available to everyone. After reviewing clips from Ryan’s “Design Fundamentals” video, we will practice identifying the 3 principal design styles, harmony, tension, and dynamic so that you can apply these design styles and techniques to your trees.

Our summer potluck at Patti Post’s house was a great success. Thanks very much, Patti, for putting up with the rowdy crowd of tiny tree enthusiasts. There was a lot of good food and conversation, and a whole lot of bonsai-related stuff was donated to the raffle. The club took in $260 in ticket sales and members went home with future bonsai masterpieces.

This month we are back to our normal monthly schedule with Jeff Sczechowski at our 2nd Tuesday evening meeting and Mel Ikeda at our 3rd Saturday workshop. I hope to see you both days. 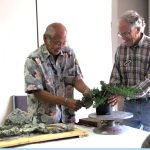 Mel Ikeda will be at the Goleta Valley Community Center this month. Mel conducts demonstrations throughout the United States. He is active in many clubs, serving on their boards as well as that of the Golden State Bonsai Federation, where he performed live demonstrations at the recent 2019 Bonsai-a-Thon. As usual, he donated his results to the Bonsai-a-Thon auction for the benefit of the Golden State Bonsai Federation. Mel created a mountainscape at our May 2019 show. There will be two workshops: 9 am to 12 noon and 1 pm to 4 pm. For space availability contact Steve Gibson at sgibson_us@yahoo.com 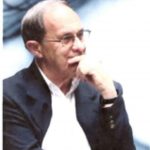 Southern Breeze Society presents a lecture “Bonsai in Japan during the Meiji (1862-1912) and Taisho (1913-1925) periods” by Tom Elias, Ph.D. The lecture will focus on bonsai during this transitional time and how bonsai then were different than the bonsai we see today in Japan. Tom has been a bonsai historian for nearly 25 years and has written many articles and given lectures about the history of bonsai and penjing. The lecture is open to the public and will be held in the Head House Classroom in the Greenhouse Complex, 1151 Oxford Road, San Marino, California. 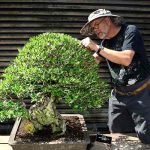 Bonsai master Ted Matson leads an intensive four-session gakko, or school, in the art of bonsai. Geared to beginners, the sessions explore the history of bonsai, basic tree botany and horticultural challenges, design concepts and training techniques, and bonsai display. All supplies and tools are provided, including demonstration trees for classroom practice. This is a two-weekend academy. The class will be held 10 a.m. to 4 p.m. on Saturdays and Sundays, Oct. 5, 6, 12, and 13, 2019 at 1151 Oxford Road, San Marino, California. Members: $120. Non-Members: $135.

Photos From The Summer Potluck And Raffle

For our annual summer potluck and member raffle on August 18, the setting was beautiful, turnout was great, there was a ton of really good food, and we had more items donated this year than in any past year I can remember. Of course, I have trouble these days remembering my name and where I live. Still, it was a magical day. Ernie
Left: John Bleck and Tina Hammond ready the bounty for the raffle.

Member Trees: A Rock Planting In Need Of A Large Display Table

So, a gasp went throughout the boat traveling to Misty Fjord and I ran on deck to see what everyone was looking at. Turns out to be the largest bonsai rock planting I have ever seen! I guess everything really is bigger in Alaska. It took a lot of bonsai soil and a lot of time to get it into a pot. Not sure how I will get it home…

The real story…New Eddystone Rock is a glacier-carved, 237-foot high pillar of basalt in Behm Canal, originally formed by a volcanic vent millions of years ago. It was named in 1793 by Captain Vancouver because of its resemblance to the lighthouse rock off Plymouth, England (Smeaton’s lighthouse). The captain told us it is a popular, though quite remote, wedding site. As one couple found, though, there is nowhere to get out of the wind and rain. Maybe a large shade screen?