President’s Message: On the Road Again

As the world is slowly (and hopefully) returning to some kind of normal, like many of you, I am (sometimes painfully) rediscovering how much busier family life, work, bonsai, and life-in-general were before the pandemic, and how much fun it is trying to readjust to that pace. In mid-September my wife and I attended the US National Bonsai Exhibition in Rochester, organized by Bill Valavanis. We also used the trip to catch up with family in the northeast. Relative to bonsai, our two daughters were actually at the National Exhibition! One who now lives in Syracuse came by to visit, and the other who flew in from Portlandia to work at the Exhibition (and got several hours of free labor setting up and tearing down the sales booth from her parents…). I will give a presentation on the Exhibition at a later monthly meeting.

For now, I’ll include two photos. The first is our mini partial family reunion in the Exhibition’s vendor area as proof that I was there. Can you guess which one is me with all the masks on? The other photo is a slightly distorted snippet of a ponderosa pine that was eventually sold, taken from an online 3-D photo tour of the event. I had the honor of doing the initial styling on that tree in June 2019. I know what you are thinking, and no, it didn’t die after its encounter with me. However, it did get re-designed “a little” since I worked on it. Gee, I wonder when my profit sharing-check will arrive…

After I finish typing this and sending it to Ernie to be rewritten into something coherent, I will be sleeping for a few hours then driving for 4 hours to attend the Golden State Bonsai Federation “Rendezvous” in beautiful Santa Nella. I’ll report on that event at a later monthly meeting as well. After returning from the botanic paradise that is Santa Nella, like you I have a bunch of fall work to do on my trees including fall fertilization, pruning and wiring, and doing a few more big bends on pines and junipers. This is all possible as we take advantage of a tree’s major vascular tissue growth effort in the fall that strengthens the tree for winter dormancy and sets the stage for it to pop next spring. After the “Rendezvous” I need to get recharged for our October meeting ‘cause we are going rogue, folks!! Our 12 October meeting will be converted into a spontaneous bonsai workshop to start turning donated nursery stock junipers into bonsai for sale at our Annual Show and other events in 2022. The purpose is to raise more funding for the club so we can keep bringing you fresh bonsai content and instruction. Ernie has more details on what that Tuesday evening meeting will look like below. It should be a lot of fun.

If I survive keeping up with the club’s bonsai ninjas at this October meeting, a few days later we will be hosting Bob Pressler, the owner of owner of Kimura Bonsai Nursery, as the professional instructor at our Saturday AM and PM workshops on 16 October. More on that is below too. Don’t miss it! No wonder I’m so tired… You know, I kind of miss those long dormant seasons like we had in Colorado….. Jeff

In an effort to raise money for the Club (and have a fun, learning experience), we will be holding a special workshop-type session in October. Joe, Allan and Jeff will bring small nursery stock trees (mostly junipers) for club members to style as fund-raising trees for the Club. Longtime Club member and juniper aficionado, Danny Martinez, will present a special demonstration on styling junipers to begin the meeting (15-20 minutes). His lecture will start precisely at 6:15 pm to give us more time with the trees. Doors open at 5:30 for set-up. We ask everyone to try and be there no later than 6 pm to sign or turn in your COVID waiver and pick a tree. We will send out an updated waiver that will cover the remaining activities this year so we won’t have to keep signing new ones. You can return it via email or bring it to the meeting. Members interested in doing their best to continue to develop a saleable bonsai over the next 12+ months will pick a tree for which they will be deemed “The Guardian”. The tree will remain the property of the club unless The Guardian later decides that they wish to buy it. The purchase price will be based on what other trees sell for on average. All sale proceeds will go to the club (we are trying to generate $$ for the club and its activities). Members should bring their own tools, and supplies (including wire) as if they are coming to a Saturday workshop. Don’t bring your own tree to work on unless you are planning to donate it to the club for this fund raising effort.

Members are certainly welcome to simply observe or assist those members working on trees. The trees are beginner level junipers so there won’t be that much to wire, and just getting the initial trunk line set per Danny’s demonstration should be pretty quick. Additional styling and potting may be required. We ask that you RSVP back to Jeff if you are willing to work on and take home a tree to train. These will be considered club trees and might be sold or auctioned at an event next year. If you want to work on a tree, but don’t have wire and tools, we will try to have extra tools and wire. We will ask everyone to be done and cleaning up by 7:45 pm so that we can be out by our limit of 8 pm. Members are welcome to bring trees they are willing to donate to this sale effort. ~ Ernie 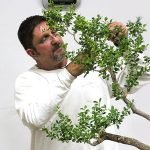 Bob Pressler moved to California in 1984 and met John Naka, Ben Oki and the whole crowd of Southern California bonsai artists and clubs which really helped him expand his skills. He has been the owner of Kimura Bonsai Nursery in Los Angeles since 1996. He is a member of the California Bonsai Society and John Naka’s club Nampu Kai. He conducts several classes a month at his nursery as well as demonstrations and workshops for clubs near and far and several conventions. Bob will lead 2 workshops to be held outside in the garden area at GVCC. Tables will be provided and socially distanced, one person per table. This does limit how many Club members we can accommodate, so if you are interested in attending, please let Carol Hicks know as soon as possible which session you want to attend. Bring trees that you want help with or have questions about. The same Covid rules listed above apply for the workshops too.

The Bonsai Swap Meet celebrates its 7th year in 2021. We have buyers coming from San Diego, Fresno and Phoenix Bonsai Society. We will have 40-50 sellers and 100+ buyers. It’s free. Saturday October 9th at 10 am at 7100 White Oak Avenue, Van Nuys, California. Please park on White Oak. This is an informal opportunity to buy, sell, swap bonsai trees. Please contact Keith at minguseyes@gmail.com if you have any questions or want to see the trees that sellers are bringing. You don’t want to be late. Bring cash. (VP’s note): It’s also only 2 miles from Bob Pressler’s Kimura Bonsai Nursery. Since Bob will be the instructor for October workshop, this will be a great chance to pick up a tree from the sale or from his nursery to take to the workshop. Also, for our October meeting, I will be bringing some “thumb-thick” rooted cuttings of Portulacaria afra “corkbark” and some other odds and ends to give away as door prizes or raffle if we have enough interest.

Glenn gave a live repotting demo at the September meeting. He said there are two methods of repotting that he utilizes, reducing the root ball by cutting it in half and eliminating some soil; or by bare rooting, cutting the root ball in half, using chop sticks to get rid of most of the soil, and dunking the roots in a bucket of water to get rid of the rest of the soil. For the demo he bare rooted a young azalea. At this time he cuts off some unwanted roots, such as those too high on the trunk, or those crossing over each other. This allows for the beginning of a uniform nabari. For growing pots, he likes to use black squat nursery containers, which he cuts down using a sabre saw. He suggests increasing the pot size 1 to 2 times at each repot. Other more expensive pots he likes to use are the plastic or clay training posts. He likes the Korean plastic pots sold by House of Bonsai, as they have great drainage.

When the tree is ready to repot he adds tie-down wires and makes a mound of his potting soil mix. Glenn uses 50-60% Kanuma, 35-50% Peat Moss and 5% (optional) of Cocoa Chips. He said finely chopped Sphagnum Moss, Fir Bark or Redwood Bark can also be used instead of Peat; or a commercial Acid-Loving Potting Soil. He suggests repotting every 2 years for younger plants. He said azaleas become rebound quickly. Rather than wire the roots directly and chance damaging them, Glenn puts plastic tubing over the wires and wraps them around the base of the trunk, he then pulls up on the trunk as he adds more soil and uses chop sticks to fill in gaps. Finally, he adds some fine Kanuma until the tree seems to be tight in the pot. Then he uses a top mulch for moisture retention.
Azaleas can suffer from red spider mites, thrips or mildew. He suggests using the appropriate controls, but not to spray on oils. ~ Ernie 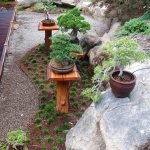 Our bonsai display at Lotusland is getting rave reviews! Jeff Sczechowski, Wally Kunimoto, Joe Olson and I currently have trees on display. This will be a rotating exhibit of Club member trees, changing trees approximately every 2-3 months. The three stands were created by longtime Lotusland gardener, Mike Furner, using wood from a 104-year-old Monterey Cypress that towered over the main lawn, until it had to be taken down for safety reasons. The trees have a dedicated, timed watering system and get watered for 2 minutes every morning. In lieu of individual signs for the trees, Lotusland created a sign with a QR code that takes viewers first to their site for a brief history of the art of bonsai, then links to a brand new page on our website, created by Danny Martinez, that lists the owner and tells the story of each tree. Please visit: https://www.lotusland.org/gardens/the-gardens/japanese-garden/bonsai-exhibit-in-the-japanese-garden/ and https://www.santabarbarabonsai.org/lotusland-display/