Having had no monthly meeting or Saturday workshops in the entire month of April, plus with no upcoming events to announce, I was looking at a lot of empty white space in this month’s newsletter. I thought about claiming that the pages were actually photos of a large container of pumice taken on a very foggy day, but wasn’t sure if I could pull that off. So, I send out a call for members to send me tree stories. Fortunately, for me (and you) several Club members saved me. Here are their trees and the stories that go with them. 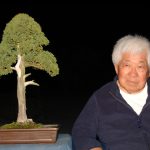 The trunk of the formal upright is a Foemina juniper. It was airlayered from a 30 foot tree in my yard about 15 years ago. The foliage is grafted Kyushu shimpaku. It was in-arch grafted in the back of the trunk so that the jin (lime sulfer treated) has a good contrast with the foliage in the background. The in-arch graft may have been done about 8 years ago. Wally Kunimoto 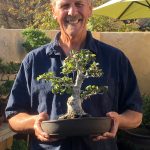 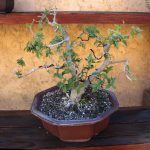 Barbara’s annual show. I was not yet a member of the Club and had very few trees. I really wanted an oak. I liked this one that a guy I met at the show named Joe Olson had started from an acorn. But the V-shaped trunk always bothered me, so eventually I cut the right side off and turned the tree away from the cut. I have shortened it several times and hope to get it into a shohin pot one day.  Ernie Witham 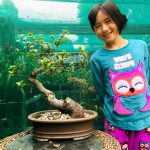 Phae was so surprised and proud to be recognized by the club. (Phae, our youngest and one of our most enthusiastic members, was awarded the Golden State Bonsai Federation’s “Plant a Seed” award at our March meeting.) Phae was even more excited about her new Oak tree. Patty won the tree fair and square. It was the nicest thing that she gave it to Phae. (President Joe Olson brought the oak to his presentation on oaks and gave out free raffle tickets. Patti Post won it but immediately gave it to Phae) Here it is, freshly potted, and it is now a new favorite in the garden. Phil Watt 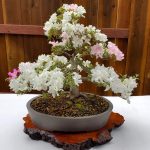 Shira-Fuji is one of the rare variegated Satsuki azalea cultivars. This azalea was acquired over 30 years ago from Nuccio’s Nurseries and was grown in my garden for many years. I was not preparing it for this year’s show,  but the rains seemed to rejuvenate it. It has a lot of blooms because I do not normally debud it since this cultivar is very difficult to debud without damage. Glenn Griffin 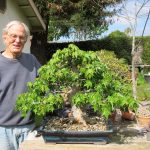 This is my favorite trident maple. I bought it in 2002 from club member Paul Kniffel who was 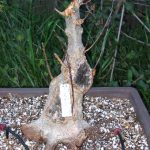 moving out of state. The first picture shows it as it looked in the early stages of training in 2004 shortly after I topped it and cut off very large side branches. Huge scars are evident and the current branches are just beginning to grow. The other picture shows it as it is today in an antique Japanese pot that belonged to Amy Kakimoto. Joe Olson 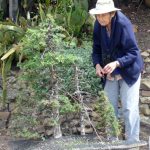 I was obviously inspired by watching John Naka creating one of his impressive big groves. Large pots in those days were $300 or more. So I started making them, with a lot of unsuccess. I needed something strong for internal support. At that point in time large aluminum antennas were gracing peoples’ yards so they could receive whatever nonsense was being spewed out to extract $$ from viewers. Since we ceased to need ours it came down, and I admired the nicely curved aluminum form filled with small holes, so my helpful tolerant husband got out his hand-held eletric saw, and proceeded to go through at least 4 blades, cutting a nice large oval, onto which I plastered my version of special cement mix. By golly, just let me see you develop cracks the way some others have, I thought!  It hasn’t, but then, some of my  fiber-glass and resin ones haven’t, either. The trees? Back in about 1975, La Sumida Nursey had a large un-named juniper on sale, so I bought it. I wanted the whole grove to be identical, so I airlayered several branches for trees, and rooted some cuttings. Here I am years later pruning it. Susanne Barrymore

Once again this month, I hope all of you are staying safe and well. Unfortunately, there is no club meeting or workshop in May, and most disappointingly, no show and plant sale. At this time, it’s still unclear when we will be able to resume anything like normal activities.  If we have to stay home as much as possible, I think those of us who are superannuated retirees with a backyard full of little trees have little reason to complain. Between pruning, pinching, wiring, watering, and repotting, there is always something to do today and still more to do tomorrow.  Mirella and I have been in almost daily contact with our son and his wife, either by phone or Skype. In one of our conversations I was telling our son, well I think he would describe it as more like whining, that I was running out of potting materials and I was too cheap to pay the exorbitant cost of akadama online. He listened politely but didn’t say much.   Several days later UPS dropped a couple of heavy boxes on our front step, each box weighing almost 50 pounds. Inside were, you guessed it, four big bags of the prized but pricey Japanese soil. I should have enough now to last for quite a while. My trees will be happy, and our son won’t have to listen to me whine again soon.