The bonsai display in Lotusland’s Japanese Garden is a collaboration between Lotusland and the Bonsai Club of Santa Barbara. All trees in the display belong to Club members and are maintained and rotated by the Club on a regular basis. Below is a description of the trees currently on display. 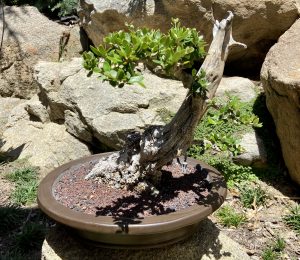 I purchased this olive (Olea europaea) at the Santa Barbara Bonsai Club and Sale years ago at the Santa Barbara Botanic Gardens. It was in a nursery bucket and in dire need of repotting. I transplanted it into a growing pot, cut the top to reduce the overall height, and pruned it way back. I repotted it into its current shallower pot 3 years ago, which allowed me to show more of the base of the tree and accent the slant style. An interesting aspect of this tree is the single live vein snaking up the front of the tree which all of the foliage emanates from. I estimate this tree to be 30-40 years old. 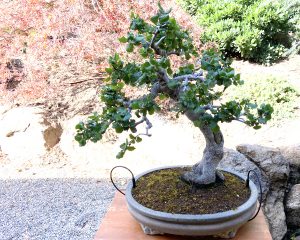 Coast Live Oaks (Quercus agrifolia) are found all along the California coast and into northern Baja California.  This tree spouted up as a “volunteer” in the back yard of Bonsai Club of Santa Barbara President-Emeritus Joe Olson, who is also an exceptional bonsai artist and oak species expert with a variety of oaks in his collection.  Joe dug it up in February 1999 and allowed it to grow for 20 years before handing it over to me in January 2019.

This is the first oak I have worked on, so I am still learning how to best take care of it and when are the optimal times of the year to work on it (which usually means sending an email full of questions to Joe).  It will take me a few more years to fully refine the tree so it looks more like a old coast live oak you might on a hillside while driving through the Santa Ynez Valley. 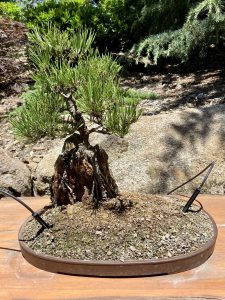 Japanese Black Pine (Pinus thunbergii) It is about 15 years old. I planted the seed and when the trunk was about
1/8 inch in diameter, the tap root was cut off and the few side roots were carefully arranged as it was planted in a gallon nursery pot. The rock was cut flat on the bottom at Santa Barbara Stone. Wire was epoxied to the rock in several places to secure the roots during transplanting. When the trunk of the black pine was about 1/4 inch in diameter, I placed it on the rock and carefully secured the larger roots via the epoxied wire. The black pine and rock was placed into a larger container and soil mixture was added all the way to the base of the black pine trunk. Every year or two, the soil mixture was removed to check on the rootage. If there were gaps (root to rock) the rootage was forced to the rock via various methods. A year ago, the rock planting was finally placed in a bonsai pot. The rock rests on three, half-inch thick by one inch square redwood pieces. With soil under the rock, more rootage can develop. 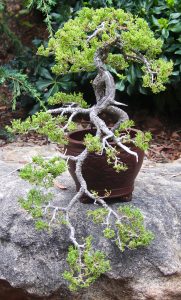 I purchased this cascading Juniper from someone thinning out their collection in 2017. It is one of the many trees originally grown and styled by Sumi Arimura of Camarillo, head sensei at the Oxnard Bonsai Club. Sumi moved here from Kagoshima Japan in the 1950s. As a kid he would watch his grandfather work on trees at his bonsai nursery across the street from their house in Kagoshima. He has a unique flavor of classic styling and growing techniques inspired by his grandfather and the many bonsai nurseries he would routinely visit in Japan in search of secrets. Sumi also smuggled seeds and cuttings of unique species/cultivars in his son’s diapers – the perfect deterrent for airport security unwilling to risk inspecting them. Sumi ran a flower business with 80-100 employees over 500 acres and would work on trees all night after work and every other available hour. He also designed & built Japanese gardens and provided annual maintenance for his clients up until just a few years ago. Many of Sumi’s bonsai (easily in the 10’s of thousands), Japanese gardens and niwaki are spread across Ventura, Santa Barbara, LA, San Diego, Northern CA and beyond. I potted it in 2018 and after wiring, pruning branches, and creating some additional deadwood, I have been letting it grow to develop a larger crown, a style popular in older cascades. I repotted it into a smaller pot in July 2021. The tree is approximately 30 years old. 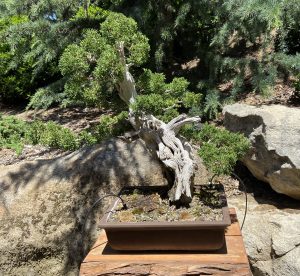 This Shimpaku juniper (Juniperus Chinensis ‘Shimpaku’) was started from a cutting in the 1980s placed behind the back of a piece of California Juniper driftwood. This technique is called Tanuki which refers to the Japanese badger who often appears in disguise in mythology. The driftwood here makes the tree appear much older than it actually is while the juniper foliage trained up the back having fused to the driftwood adds to the illusion of great age.