Glenn with a slant-style Azalea

Long-time Club member, Glenn Griffin, was able to merge the ancient Art of Bonsai with one of the newest forms of teaching – Zoom technology – in presenting a hands-on class on Azaleas. Six of us, including Phil and Phae Watt, Wally Kunimoto, Carol Hicks, Debra Martin and me, learned the best types of Azaleas for creating bonsai, as well as watering, fertilizing, potting, pruning and wiring techniques. The class was in two parts. The first session was an informative introduction to Azaleas, and the second part was a hands-on wiring class. Glenn provided us with thorough outlines and example sheets for the class and future reference. Though notably different from our normal group workshops, in that I couldn’t wander around aimlessly while munching on cookies, Glenn said he found it interesting that he could easily observe all of us working and make comments to each of us. I want to thank him for not commenting on my many crossed wires. I encourage participants to send photos taken now and in the future so we can all see the results of our efforts.

President’s Message: No Dues Due

We haven’t had a meeting since March, our last Saturday workshop was in  February, and when we will be able to return to anything close to normal  remains a big unknown. Let’s hope things improve soon! However, in light of our murky future, the club will waive 2021 dues for current paid-up members. For those who might like to make a donation to the club in the amount of the regular dues, we will happily accept your money next year, but if you have paid your 2020 dues, you are automatically a member through the end of 2021 with no further action on your part.

Now some good news. Ernie Witham is working with Lotusland on plans to bring a Bonsai Club of Santa Barbara sponsored bonsai garden to their new Japanese Garden. It’s still very much  in the planning stage, but here’s the gist of what Ernie reports to date. Lotusland has just about finished the pavilion in the Japanese Garden. There is a small area behind it they are calling the secret garden (you can’t see it from anywhere but the pavilion). Ernie and the garden staff were trying to figure how to make it better and they thought of bonsai. Right now they  are thinking of 3 stands – tall medium and short – displaying 3 trees and it would mean the building of three stands and either the donation of three trees or a loaner program, swapping out three trees every now and then. Thanks, Ernie, for initiating this. We can use some of the available money in the club’s endowment fund to get the project going once the details have been fleshed out.

Jeff came to our Club from Colorado, where he was able to find and work on trees that we do not have in California (as least that I know of). Here are three of Jeff’s trees: a Colorado Spruce, a Ponderosa Pine, and a Rocky Mountain Juniper. Jeff was headed into surgery for a new hip at press time. Here’s hoping for a speedy recovery. 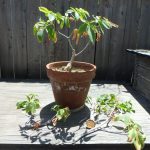 I collected the seeds for these California Buckeyes (Aesculus californica) in the Nevada County foothills of the Sierra Nevada sometime during the 1970s. They have languished in growing containers ever since, one in a large container and one in a small container, with only occasional haphazard trimming. 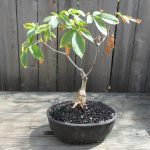 I recently realized that I may not have the luxury of waiting another 40-plus years to do something with them, so I decided it was finally time to trim them again and put them into bonsai pots, although they are a long way from being show-ready. I have never seen a buckeye bonsai anywhere and I’m still not sure how successful they will be, but I have discovered how forgiving they are of neglect and how resilient they are after severe pruning, both of branches and of roots. 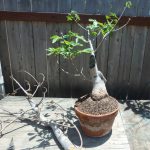 After trimming, and as I was about to take the smaller one out of its clay pot, I remembered that Ernie wanted pictures for the newsletter, so I gathered up the trimmings and took a picture. Another picture shows it newly planted in a bonsai pot for the first time. It’s not quite at the position and angle that I wanted, but I had severely root-pruned the tree and I was reluctant to remove yet another large root.
The larger tree has a similar story, but I neglected to take a picture of it in its original very large terra cotta pot before repotting it. I sawed an enormous portion of the roots off the bottom of the tree and still couldn’t fit it into a bonsai pot, so I settled for another smaller terra cotta pot for now. I’ll saw off some more roots in a year or two and see if it will fit into a bonsai pot then. The tree also had two huge scars where I removed a lot of top growth, so I placed some wet moss and foil tape on the scars to help them heal. The tree has an impressive base and I’m hoping I can develop the crown of the tree into a pleasing shape. And, I just couldn’t resist taking a picture of the little grasshopper that was watching as I worked on the tree. California Buckeyes are large bushes or small deciduous trees that leaf out very early in the year and often drop their leaves by July when growing on hot, dry hillsides, but keep their foliage until later if they have adequate moisture, such as when in a pot. They have spectacular, erect clusters of white flowers in spring (but mine in containers have never bloomed) followed by large round seeds that are said to bear a striking resemblance, in color and shape, to the “eye of the buck.” A good place to see California Buckeye growing in a spectacular landscape is along the lower elevations of Generals Highway in Sequoia National Park between Giant Forest and the town of Three Rivers.

This Trident Maple was started via a cutting I got in 2002 at one of our club meetings. It was grown in a nursery container for several years. The nebari has being developed over several years via severe root cutting nearly every year in Jan/Feb. Trunk diameter is 2.5 inches and the overall height (including the pot) is 27 inches In mid Aug. 2019, it was defoliated and from then on, only rain water was used to water it. The fall color of the foliage showed no brown edges on the foliage. Had I used our hard water the foliage would have brown edges or potato chip like as Joe Olson would say. The trident photo with the green foliage was taken on June 26, 2020
For the Shimpaku Juniper, the Prostrata trunk was air layered off of a prostrata that was growing in the yard maybe about 12 years ago. Kyushu shimpaku was in arch grafted to it 9 years ago. The trunk diameter is 1.25 inches and the height (including the pot) is 18 inches to apex of the jin.

Michael Hipskind has submitted this work-in-progress tree (aren’t they all work-in-progress trees?) for input? “I have a Procumbens nana juniper I styled last spring and I could use some advice on doing the Apex. I got the pot at the Club sale last year. Great Buy!” Any suggestions? email Michael at michaelhipskind321@gmail.com 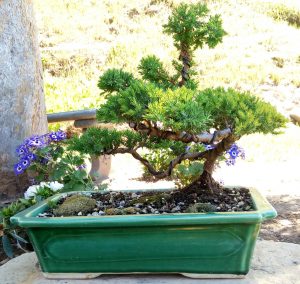