Mel Ikeda is familiar by now to most, if not all, of our members. He joins us at least once a year for a Tuesday evening presentation, comes to town at least twice a year as a Saturday workshop guest instructor, and has done a demo at our May show for the last several years. It’s a long drive from his home in Costa Mesa, but he nevertheless seems to enjoy his time here! His engaging demonstrations are always interesting and usually have some sort of unusual twist or element of surprise to them. Hope to see you all there. Meet and greet begins at 7 p.m., the meeting begins at 7:30. 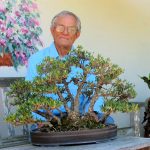 Wow, I don’t think anyone is going to miss January 2018! I hope all of you survived it with no lasting damage. I’m looking forward to getting back to a good old boring routine of nice weather interrupted by an occasional gentle rain. Envious of Ann Erb and Susanne Barrymore’s rainwater collection systems, my wife and I have placed several large trash cans under our eaves. I’m hoping to collect enough rainwater to keep my maples happy throughout the growing season and prevent the leaves from turning brown and crispy, or what I call “Potato Chip Syndrome”. Finally, a friendly (not nagging, mind you) reminder to pay your dues if you have not done so already, and it’s not too late to sign up for our very useful and enjoyable third Saturday workshops.

Well, we didn’t actually critique members, but you do leave yourself wide open “for discussion” if you do not attend the monthly meeting! That said, this was a well-attended critique session especially considering several members from down south could not get there because of the 101 closure. We had many trees to comment on. Lynn Lopez found that her juniper needed a lot of jin. (I, too, often require a lot of gin.) Ann Erb said it is better to leave a lot of jin in case you break one off. Ann thought Susanne’s bunjin style tree was a bit too tall. Speaking of too tall, Tom Post brought in a trident maple that barely cleared the ceiling. It was suggested he cut it back “a bit.” Jeff brought in a tree in a really nice pot. Ann and John searched for the artist’s initials on the bottom of the pot. Turns out it said: “Kilroy was here.” Steve brought in several trees including a “tree eating rock.” It was suggested he clean the moss off his oleander. Joe brought in his near-perfect maple and John brought in a great shohin olive. Ann said if you have trouble keeping suckers from growing off the roots of an olive to use a product called “Sucker Punch.” Great name! I brought in a carefully pruned small ficus and it was suggested I cut off everything and start over. It was a great session! 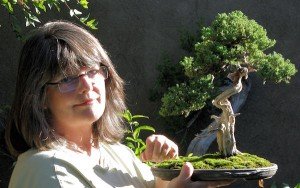 For the past thirty years, Cheryl Manning has been passionate about the art of bonsai. An artist since childhood and an avid gardener since her teens, Cheryl discovered Murata Bonsai Nursery in 1981 and it was love at first sight: art and gardening wrapped up in one small package. In 1985, Cheryl joined Satsuki Kai, a club of the leading bonsai masters in West Los Angeles. Because the meetings were conducted in Japanese, she understood very little, but her commitment was strong and she formed lasting friendships. By 1989, Cheryl was hiking in the Tehachapi Mountains with Harry Hirao, collecting California junipers. Later, she was fortunate enough to become not only a student and close friend of John Naka, the father of American bonsai, but also an apprentice in Japan with bonsai master Yasuo Mitsuya, owner of Tokai-en in Toyohashi. Cheryl has conducted bonsai demonstrations, workshops, and slide presentations in the United States, Canada, and Australia. She’s written more than forty articles for many bonsai publications and currently pens a column “Trash to Treasure” for Bonsai: Journal of the American Bonsai Society. Cheryl has also edited John Naka’s Sketchbook (National Bonsai Foundation, 2005), a compilation of John’s bonsai sketches from around the world. She will be helping us design and shape our trees at the Goleta Valley Community Center for two sessions: 9-12 and 1-4. If you are not already signed up there may still be a few spots open. Contact Steve Gibson sgibson_us@yahoo.com or Tina Hammond bhammond23@cox.net

Bonsai-A-Thon XXII will be held at the Huntington Library and Botanical Gardens, 1151 Oxford Road. This is the annual fund raiser for the GSBF Collection at The Huntington. Event admission is free with Bonsai-A-Thon “early bird” registration between 7:30 AM – 9 AM. Event hours are 8 AM – 5 PM both days. Pancake breakfast, demonstrations, lunch, bonsai exhibits, large sales area, raffle and auction. For more information visit www.gsbfhuntington.com This is the one show not to miss! Usually, one or more members of our Club have trees on display. Also, most of the presenters and workshop leaders that come up to Santa Barbara to help us with our trees will be there, including the curator of the Huntington’s incredible collection in the Japanese Garden, Ted Matson. The vendor section features many trees and pots for sale are fairly reasonable prices. If you wear your badge you will get free admission to the show and to the entire garden for the day.

Keith’s house, located near Barker Pass Road in Montecito was in the “line of fire” for the recent flames that devastated Ventura and Montecito in the largest fire in California history. He had to get out immediately. Keith said: “I was evacuated for about a week. My next-door neighbor, Geoff Crane owner of Giffen and Crane Construction stayed and did not leave and went into water my bonsai collection halfway through the week. If not for his help I would’ve lost my collection.” 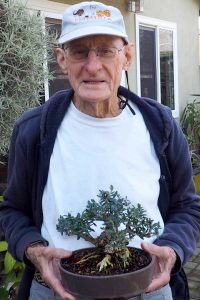 This olive was from a workshop at the February 2014 Shohin Convention in Santa Nella. The original pruning was done by the workshop instructor, Sam Adina. The plant was in a squat 5 gallon container that was cut down during the workshop. The first photo shows it before a pruning in 2016. In a club workshop in November 2016 with instructor Jim Barrett, there was further pruning done. In early 2017 I planted it into a Bonsai pot and now I’m planning to enter this olive in our May 2018 show. 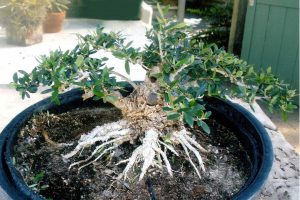