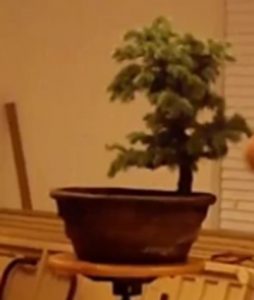 In the February 2021 newsletter I bored you to tears with philosophical musings on parting with most of my native Colorado yamadori trees. Here is a short story on one of those trees complete with photos so if you are tired of my feeble attempts to wax poetic, you can just look at the pictures.

This is a Colorado Blue Spruce (picea pungens) collected near South Park, Colorado around 2010. I acquired the tree in a Rocky Mountain Bonsai Society (RMBS) “White Elephant” sale in 2012. The first photo is a screen shot from a RMBS club meeting where Michael Feduccia selected it for his 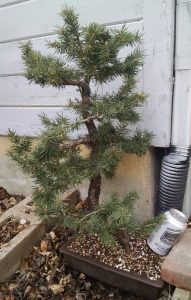 demonstration in April 2013.  There is a short, grainy video clip of this demo posted on the RMBS Facebook page with a 360 degree view of the tree.

The second photo shows the tree in May 2015 in Colorado.  I hadn’t done much work on it after the demo work other than repot it into a rectangular bonsai container. 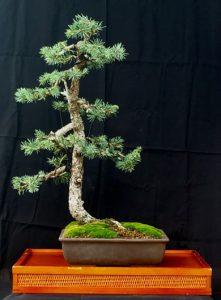 The 3rd photo shows the tree in June 2020 here in Santa Barbara when I attempted to put lipstick on a pig and take a decent photo since Ernie wouldn’t come to my house to take a real photo (some business about a “pandemic” or something).  Check out that moss!! I grew it here in SB using my “secret open weave non-slip rug pad trick.”

I’m sad to report that as of December 2020 the tree is living in Albany, OR, enjoying a nice cold winter with a much more hip new owner.     Jeff

President Allan Hemmy has been furiously scouring the interweb thingy to find bonsai professionals interested and available to give a presentation or demo via Zoom for some of our upcoming virtual club meetings. We hope you enjoyed Bill Valavanis’s presentation and demonstration on forest plantings along with the tour of his huge indoor over-wintering growing facilities. For our upcoming club meeting on 9 March, Vice-President Hemmy has secured the services of Bay Area bonsai artist Eric Schrader. Allan has provided more details about Eric and his presentation below.Thank you Allan!! What else can I say, other than Smallville’s loss is BCSB’s gain! May your trees stay thirsty, my friends.         Jeff

We have scheduled Eric Schrader, a bonsai professional from the Bay Area for our March Zoom meeting. The tentative topic is on California natives for bonsai. He has grown Monterey Cypress and several native oak varieties from seed with impressive results that really capture the feel of our native environment. Eric has a wonderful online shop for all things bonsai (www.bonsaify.com) and blog site (www.phutu.com) with articles on numerous topics from development to refinement. I hope everyone can attend.

On the subject of advancing our own trees, it’s a safe bet that we’ve all been spending a lot more time with our trees over the course of the last year. This can very productive or incredibly frustrating if you’ve shared my experience of being frozen by indecisiveness, not sure how or when to take that next step in design. Inevitably, when I finally decide on a course of action, the appropriate time for that scope of work has passed. In normal times, the club has had our weekend workshops or tree critique monthly meetings where advice and direction can be found. I’ve been exploring the idea of online bring-your-own tree workshops and have talked to a couple brave bonsai professionals that are willing to give it a try. I believe the format would be to have a group of 5 people, where everyone would get a total of 20 minutes of time with the instructor. That time could be spent on one or more trees or divided into two blocks between which a single tree could be worked. A 2 hour total workshop would give us time at the beginning and end for any general comments or advice. I believe the rate would be $30 per person for one session. If anyone is interested in being part of this “experiment” please send me an email (ahemmy@gmail.com) and I can work up the details and a list of possible instructors.

Along that same topic, I’d also like to explore the idea of an online tree critique monthly meeting where members can solicit styling or other general advice. The effectiveness of this style of meeting could definitely be limited by the quality of our web cameras and lighting of our spaces. One solution might be to have you email me photos and videos of your trees (especially now, while they are just waking up and not in full leaf). I could put them into a slideshow that we could reference as we discuss the various trees. We’ll need plenty of lead time to get a meeting of this type set up, so email me if you are interested. I can also set up a Google Drive or Dropbox link where video and good resolution photos can be uploaded.    Allan 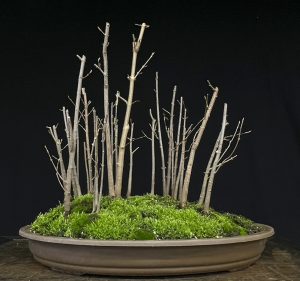 It’s a real advantage if you live in upper state New York in the winter and have a heated three-car-garage, especially if you have a huge collection of stunning bonsai like Bill Valavanis. He never did say where he actually puts his car. Having lived many winters in New Hampshire, I pictured it in the dark with icicles hanging off the rocker panels. Bill took us on a “magical mystery tour” of his garage, heated greenhouses and his large immaculate work/demo area. He has created some amazing forests and gave a great talk on the proper way to create forests and display them in a non-symetrical way. At the end of the evening he created the maple forest (right) explaining his techniques as he went. Thanks Bill. Oh, and, my wife would like to “talk with you” about my new plan for our garage.   Ernie

MEMBER PROFILE: WALLY KUNIMOTO
When I was in the 6th grade, I saw a coconut tree bonsai in an ad in Popular Science magazine. I asked my dad for 50 cents to get the information. He remarked that a coconut is as large as my head and no one can make it into a bonsai that you can hold in your hand.

In 1965, I went to a bonsai demo by Frank Nagata (one of founding member of The Bonsai Society of California (TBSoC) at his small nursery in LA. I immediately bought a juniper and created my bonsai. I attended a few more demos and created more bonsai. My wife reluctantly said, “it looks good.”After attending a bonsai show at the Museum of Science and Industry sponsored by TBSofC, I realized that my bonsai were more like potted plants. After talking to owners of bonsai on display, I concluded that John Naka was their highly regarded teacher.

In 1969 we finally had monthly workshops at the Buddhist Church with John Naka. Lew Abe of Abe Nursery talked many gardeners into attending. I remember Sono Riusaki (cashier at La Sumida Nursery) telling me that a lady who did surgery on frogs at UCSB maybe would attend. That was Susanne Barrymore.

In 1971, Leroy Kubel, two others and myself, all working at Santa Barbara Research Center (SBRC) met to form our present club. Leroy was our first club president. 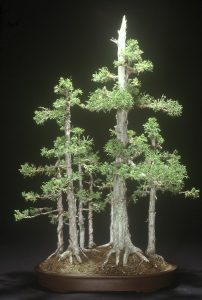 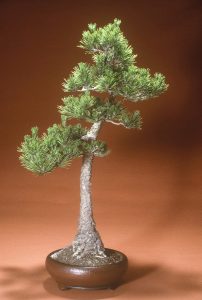 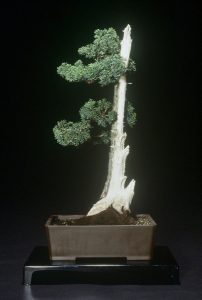 When the demand for John Naka’s time increased in the US and world wide, we were fortunate to get some of his best students to come to SB to teach at our workshops including Ben Oki, Frank Goya, Shig Miya, and Mel Ikeda

In 1990 I worked in Anaheim, CA for about a year and half. Most of my early bonsai went to bonsai heaven. The following are three of them: Juniper blauui upright, Japanese black pine bunjin style and foemina juniper group planting.

Upon retiring in 2002, I started to do air layering, digging junipers from my yard and eventually doing a lot of inarch and scion grafting of shimpaku onto to prostrata junipers. So most of my decent looking bonsais have been created since 2002. My goal in the future is to create and add a foemina juniper grove, a broom style zelkova, and a literati Japanese black pine with grafted white pine brancheto my collection.            Wally