As much as I love the Japanese Garden at the Huntington, I find incredible beauty and serenity at the ever-evolving Chinese Garden. Every time I visit, I find something new. And there are several even newer structures and pathways under construction. My only regret on my recent visit was that the restaurant was not open.

President’s Message: More Of The Same

Once again, I hope you are all staying safe and well. As we move into the fifth month of stay-at-home limbo with no clear end in sight, I think we are all quite weary of the present situation. However, the upside of so much time in the backyard is that my trees have never before had so much attention as they have in these last few months. I enjoy the time I have been able to spend working on them , and I hope they have gotten a little better in the process, but who knows? I miss the inspiration and motivation from our meetings, classes, and our show.
The only real news I have is that Ernie is continuing to work with Lotusland to see if we can partner with them to have a bonsai display at their Japanese Garden pavilion. 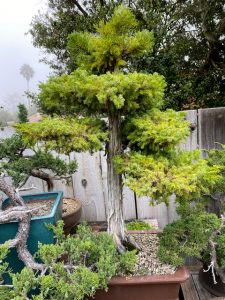 This Foemina juniper, in a formal upright style, has been in training since the 1980s/1990s. It was dug up by Keith from the four acres of Ann Beebe’s Riven Rick home in Montecito.
It had been chewed on by Ann’s horses over the decades so it had a blunt top and a decent trunk. Ann always called it the “horse pasture tree,”Keith said.
Ann Beebe still resides at Vista Del Monte nursing home in Santa Barbara and is approaching the age of 96 years old. She is a lifelong friend that Keith met through an adult education Bonsai class in the late 1970s.

Cheryl Manning, one of our excellent guest workshop instructors, often talks about turning doubtful material into nice bonsai, a 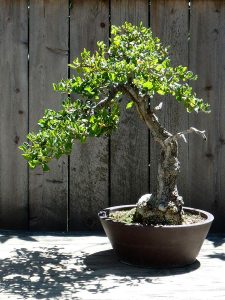 process she calls “Trash to Treasure”. While my tree may not truly be a treasure, I’ll indulge in a little hyperbole and call this story “Treasure to Trash to Treasure”. This Coast Live Oak is one of my oldest surviving trees. I started it from an acorn in 1979 and it grew happily and successfully for quite a few years, or at least I thought it did up until most of the tree died, leaving alive only that big branch you see on the left side of the tree that was growing rather high on the trunk. There was not even a live twig on the right side or at the apex, just one sad and lonely side branch. I was contemplating converting the tree into what I call the Firewood Style, but before I could discard it, it fortuitously put out a bud at the very top of the V where the branch and trunk met. In the years since then, a full new crown has developed and the tree now looks, in my mind at least, like an old oak that has survived a long hard life growing on the side of a hill in the Santa Ynez Valley.

I was given this bougainvillea bonsai in May 2005 when it was four years old. I re-potted it  in September of 2007, according to the information on the care sheet. I’ve been so busy planning a trip that out of all my poor neglected bonsai this was the best trunk.  Everything else is overgrown.

I found this Prostrada juniper at Terra Sol nursery in Santa Barbara years ago. I had no idea what to do 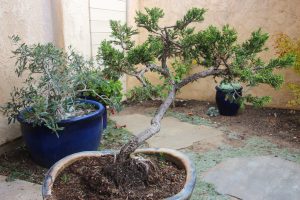 with it as I was still fairly new to bonsai. So, I took it into a workshop led by Ann Erb. She told me the large branch on the upper right had to go. As I often do, I gasped at the thought of losing such a big branch. But I said okay and closed my eyes as she sawed. Turns out, as usual, she was right. Over the years I have cut it back more, found an apex, and have repotted it into increasingly smaller pots. It is variegated, which I know is not ideal for bonsai trees, but I pinch back the yellow tips to keep them to a minimum. You might also notice in these two photos, that I have gained a few trees over the years from when I first started out. I’m sure you all know that feeling!