It’s time once again for the club’s big summer event! (And our only event this month: there is no regular Tuesday meeting or Saturday workshops) Our annual Summer Potluck will take place at Tina Hammond’s house, 3245 Campanil Drive, Santa Barbara. And, as usual, it’s a real potluck, so bring a dish, any dish, to share. After lunch, stay for the raffle, and bring any bonsai-related items such as plants, pots, tools, books, etc that you would like to donate to the raffle. There are always at least a few treasures available, so bring a few dollars to take a chance on winning one or two of them. Attendance of Spice (that is the correct plural of spouse, isn’t it?) and Significant Others is definitely encouraged.
See the accompanying map for directions. 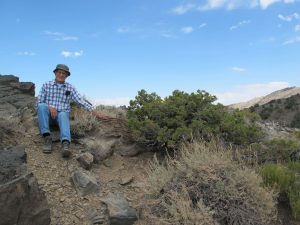 Ernie’s still on vacation in Germany, so I’m writing the newsletter for him this month, and instead of his humor you’re stuck with my dry prose. Ernie reported that it was 92 degrees in Hamburg and he was headed for the North Sea hoping to cool off. He didn’t say if it was 92F or 92C, but I do hope that he converted the temperature to Fahrenheit before sending it on. I recently returned from a great tree-hugging trip and can’t resist sharing this picture of a huge natural semi-cascade bunjin Utah juniper in the White Mountains. Nature must have taken a lesson from Harry Hirao (“Mr. Juniper”) when she created this tree. I hope to see you at the potluck at Tina’s house on the 19th! Joe

Ernie may be in Germany, but he still managed to send me a writeup of his presentation and pictures of his trip to Japan:

“Though it’s not really a requirement for being a humor writer, it helps if you are someone who screws up a lot. This is not an asset for a bonsai owner. Also not a great thing for someone putting together a slide show for a Club meeting. Shortly after I transferred the meticulously ordered slides from my computer to my flash drive, I discovered that the Apple gods thought it would be fun to reorder the slides into their own order. “Oops, he we are again in Tokyo…no Kyoto… no on the train. Oh, Tokyo again, doh!” Anyway, people seemed to enjoy the slides whatever order they were in and the stories that went with them, especially almost not finding the house we were to stay in. Here are a few photos for those of you who missed the show.” 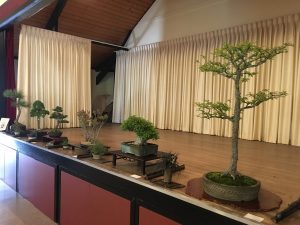 Thanks to capable volunteers Jeff Sczechowski, Carol Hicks Ann Erb, John Kopp, and Wally Kunimoto who stepped up while I went AWOL, the club once again had a nice bonsai display on July 21 at the Buddhist Church of Santa Barbara’s Obon Festival. At right is a picture of the display. Jeff, Ann, Wally, and John Bleck had trees on display.

From The Club Librarian

The club’s library has a good selection of books available to be checked out by our members. From time to time, Susanne Barrymore selects one and shares her thoughts about it. Here are her thoughts about The Gardener’s Book of Pests and Diseases, by Dr Roland Fox:

This book, written for English gardeners, thinks it is complete. However, at Ted Matson’s class on July 21, when he inspected the fig cutting I had rooted and grown a well branched size, he commented he thought he saw some scale. I looked scale up in the index and found nothing. However, as I flipped through the pages, near the end, page 139, it showed brown scale, also not listed as such. Also, flipping pages I came to a picture of Adelgids, page 51, on needles of young Scots pine, also not listed in the index. About 20 years ago there was considerable concern about this threat, and several people lost beautiful well trained Japanese Black pines and blamed it on adelgids. Roy Nagatoshi’s father showed me a beautiful pine he thought lost to this pest. If you have a large variety of plants both as bonsai and others in pots or in your yard you may find it of interest to study this book, and find some other such items, relevant to your plant needs.

Presenter and topic to be announced.