We do not have a Tuesday night meeting or third Saturday workshop in August. Instead we gather for food, fun and stimulating conversation about pruning and fertilization. The party will be catered by… you. Everyone should bring a favorite dish to share, perhaps a bottle of wine (or two), maybe a decadent dessert. For the apex of our day, we raffle off valuable bonsai-related items, thoughtfully provided by… you also. Please bring something from your collection and hopefully you will go home with something from someone else’s collection. Spouses are welcome — not to raffle off — just to have fun and meet everyone. Raffle ticket sales go directly into the club’s coffers to help us provide demonstrators and workshop leaders for the remainder of the year (see below for special offer for remaining workshops). Tom Treloggen has generously offered to host this year’s summer fest. Tom says: ”it would be better for folks to come down the driveway so they do not have to use a number of stairs at the rear of the house with food in their hands.”

If it’s August, it’s time once again for our summer potluck and raffle. Plan to bring a dish to share, any bonsai-related items you can donate to the raffle, and enjoy the day. Tom Treloggen, one of our new members, has volunteered (really!) to host the party at his house this year. Thank you, Tom, we are looking forward to seeing you on Sunday, August 27. The potluck isn’t the club’s only event this month. Tom Post has more nursery visits scheduled: to Roy Nagatoshi’s Fuji Nursery on the 5th, to Travis Goldstein’s California Bonsai Studio on the 19th, and to George Muranaka’s Nursery on September 2. July was a busy month: In addition to our regular Tuesday evening meeting – a critique of members’ trees with more trees than we had time to discuss – Tom Post led a Saturday trip to Bob Presslers’ nursery in Northridge and we had a small but very well received display at the Santa Barbara Obon Festival where Carol Hicks, Steve Iwaki, Ernie Witham, Tom Post, Wally Kunimoto, and I participated. We need a few more people to sign up for the fall semester 3rd Saturday afternoon workshops. Please consider it: It’s a bargain! The instructors are the best anywhere and the cost is much lower than you’d have to pay for them at a convention or anywhere else.

Once again, members brought trees to our annual member’s critique and were rewarded with some great advice. Steve Gibson brought some of his “larger” shohin. It was suggested he prune his lantana earlier rather than later so the flowers don’t become too leggy. Wally brought in a cork oak that had lost a major branch and he now needed to find a new front. There were a lot of opinions, so I suggested putting it into a round pot with a lot of legs, so it could be turned to please whoever was looking at it. Ann also suggested the roots were too high and it should be repotted. Wally also had a pomegranate that had never bloomed. Joe suggested he be patient. Joe had one that didn’t bloom for 30 years. Wally is going to start eating healthier so he can live long enough to see it bloom. Joe brought in a maple. It was suggested his bonsai mix was too dry for that tree. Lou brought in a ficus that he dug up from his yard. He sawed off the top and we all suggested he “carve, carve, carve.” New member Jeff brought in his juniper from the recent beginner’s workshop. It was suggested he could shorten the upper branches by wiring more movement into them. Steve Iwaki brought in a black pine that had a lot of unhealthy needles. Ann suggested putting white vinegar in his water cutting bad needles in half so as not to loose the buds and spraying foliage with fish emulsion. I brought in a struggling San Jose juniper. It was suggested I was over pruning and I should let the foliage go as long as I had let the weeds go.

Workshops are on the third Saturday in September, October and November. Morning session: 9am to 12 noon. Afternoon session: 1pm to 4 pm. at the Goleta Valley Community Center on Hollister. Right now we have room in both sessions, especially in the afternoon session. Please mail your check to the Club PO Box and indicate morning or afternoon session. Any question: e-mail Wally at wykuni@cox.net

The club received a nice thank-you from the Buddhist Temple of Santa Barbara for displaying our bonsai during their Obon Festival. Jodi Miles said: “Dear Bonsai Club Members, everyone at the Buddhist Temple is so grateful for the beautiful bonsai you shared… So many people were talking about the display and each plant. The whole auditorium became a lovely art display with your work as the focus.”
Here are a few photos from our exhibit.

Once again we have been asked to participate in another fun, cultural event in Santa Barbara. “We’d love to have you participate in our Asian American Neighborhood Festival again this year! The date is set for Sunday, October 8 from 11am-3pm. Please save the date and more information will be sent out soon. Thank you,
Kevin McGarry, Director of Programs, Santa Barbara Trust for Historic Preservation. Please think about bringing one of your trees for our display. We always get a nice response from visitors. Contact Joe Olson, joeyuccaseed@verizon.net, for more information.

Tom Post has set up visits at some bonsai nurseries close to us. This is a great time to buy great bonsai stock to work on or already finished trees. There are three visits remaining. Meet at the upper Sears parking lot in LaCumbre Plaza at 8:00 am and carpool from there. We usually stop for lunch, so bring lunch money and tree money. Most nurseries also have soil, tools and pots for sale. 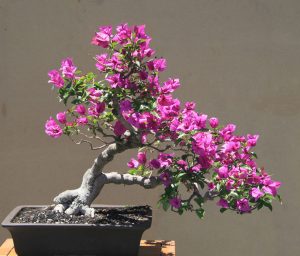 About 8 years ago, I was passing my neighbor’s yard on my morning walk and had been noticing that there were short trees with great movement all over his front yard. I couldn’t tell what kind of trees they were because there were almost no leaves on them. My neighbor was out front, so I asked what they were and he told me that they were bougainvilleas, but they had never done well in his yard. They had been there for at least 30 years. Fortunately, I told him that if he ever wanted to get rid of them to let me know and I would dig them up for him. Sure enough, several months later, he saw me and said come and get them. BONANZA ! It turned out that they had been in pretty deep shade all of that time. Placing them in full sun did the trick. I cut all flowering off for two years so that I could work primarily on the branch structure. They are becoming more compact each year.