It’s time once again for the club’s big summer event! (And our only event this month: there is no regular Tuesday meeting or Saturday workshops) Our annual Summer Potluck will take place again this year at Ann Erb and John Kopp’s house. Their home is a true not-to-be-missed bonsai wonderland featuring an extensive collection of high-quality bonsai and other botanical delights.

And, as usual, it’s a real potluck, so bring a dish, any dish, to share.

After lunch, stay for the raffle, and bring any bonsai-related items such as plants, pots, tools, books, etc that you would like to donate to the raffle. There are always at least a few treasures available, so bring a few dollars to take a chance on winning one or two of them.

Also attached is a map to Muranaka Bonsai Nursery in Nipomo. They will be open from 9:00 AM until at least noon on the 27th just so we can visit them before going to Ann and John’s house. The nursery is well worth a visit. They carry a wide variety of excellent bonsai material.

Thanks to Joe, Susie and Ernie for providing trees for the OBON festival. A Big thanks to Carol Hicks for volunteering to sit and be our representative during the festival. Although a small event, exposure such as this enhances our public face.

I have spoken to George Muranaka and he said that he will be at the Muranaka Nursery, 419 Pajaro Ln., in Nipomo, on the morning of our “Pot Luck” at Ann and John’s house also in Nipomo. George stated that 9:00 would be fine, so if you haven’t been to the Muranaka Bonsai Nursery or if you have been wanting to go again, this is a great opportunity.

See everyone at the “Pot Luck”.

Bob said his ficus trees hadn’t grown as expected because of peculiar spring weather at his nursery in the San Fernando Valley, so he brought in a boxwood (1 of 125 or so he collected a year ago). He plans three demos over three years and says it will be ready for our 2019 show! Boxwoods can develop quickly if extraneous foliage is removed in a timely manner. They are also easy to grow from cuttings and by layering. Bob did some preliminary styling as a bunjin, emphasizing the plant’s age (40+ years) and trunk movement, and leaving several “iffy” branches that may or may not be retained in the show-ready tree. He also did some hollowing of scars to add interest to features that would otherwise take eons to heal. His plan is to give the tree a light pruning in October, refine and repot it during a demo at our club next year, and give it the finishing touches at a third demo in 2019, just in time for our show!

As Tom Mentioned above in his President’s Message, the club had a small display on July 16 at the Buddhist Church. Here is a picture of the display and a (fuzzy I-phone) photo of Tom, Ernie, Joe, Susanne, and Carol. Carol said that many interested people viewed our trees during the day.

Amy Kakimoto And Her Old Olive In The News 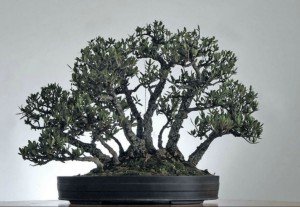 There was an article in the Santa Barbara News-Press on July 23 telling the story of our late beloved charter member Amy Kakimoto and the old clump style olive she and her husband Ikey had in 1942 when they were abruptly sent off to a “relocation center” in Wyoming. Ted Matson, curator of the GSBF Huntington Collection, thinks the olive may be one of the oldest bonsai in continuous training in the US. He says because of its history it should eventually be donated to the GSBF Clark Bonsai Collection at the Shinzen Friendship Garden in Fresno which already has a couple of other legacy trees formerly owned by Japanese-Americans. During their internment in World War II, the trees survived through the care of good neighbors and friends.