It’s August again, so it’s time once again for our annual summer potluck and raffle, this year at Carol Hicks’ house.

Potluck Lunch: Come around 11:30; we’ll eat around noon. Bring food of some sort, main dish, salad, dessert, drinks, or whatever else you want, to share with the group. Also bring serving utensils for your dish. Carol will do a big pot of chili and everyone can bring whatever they want. Carol says if you want to let her know what you have in mind that is fine but you don’t have to.

Raffle: As always, there will be a drawing after lunch, with the proceeds going to the club. It’s always amazing to see the nice bonsai-related things that members donate to the drawing. Buy some tickets and take home some treasures! And if you have pots, plants, books, or anything even remotely bonsai-related that you’d like to donate for the drawing, please bring it.

It’s August and time for our yearly “Potluck”, Saturday, August 15. Carol Hicks is opening her home to host this year’s event. It is a “potluck”. Bring your favorite dish to share. Carol will provide chili to get the ball rolling. Spouses are welcome! Come and have a relaxing day. Reacquaint yourself with members you haven’t seen in a while. I will be bringing many items for the raffle, as hopefully you will also.

Our summer visits to bonsai nurseries will continue with a visit to Travis Goldstein’s nursery on Saturday, August 29. Please meet at 7:45 at SEARS’ upper parking lot and we’ll leave at 8:00. 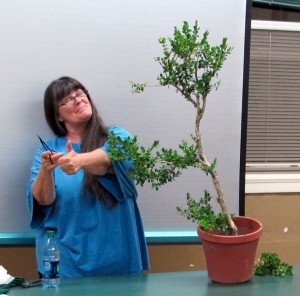 Cheryl, as promised, gave us a short presentation on current goings-on at the National Arboretum in Washington DC, including this interesting video: https://www.bonsai-nbf.org/video/a-window-into-nature/, and of course she invited us to attend the upcoming Golden State Bonsai Federation’s Convention 38, “Bonsai Fusion.” The “something” she brought from her backyard was a collected boxwood that, to my eye, appeared to be a very unpromising tree. Well, was I ever wrong! The photo shows a smiling Cheryl and what I thought was a very scraggly tree, while the sketches show three very nice future possibilities for the tree. The tree will be raffled off at our potluck this month. 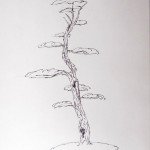 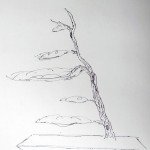 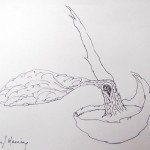 Go To The Convention!

The club has decided to use some of the money generously donated by the family of our late long-time faithful member Sally Gilmore to encourage attendance at the upcoming GSBF Convention in Riverside. Full registration at the convention is $295. On a first come, first served basis, the club will pay one-third of the registration fees for an undetermined number of our members. Such a deal! If you are interested, talk to Tom Post. 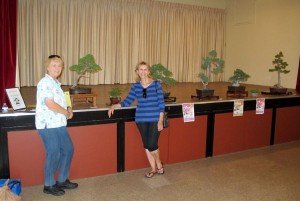 Our club was invited to show a few trees at the Buddhist Church of Santa Barbara at their Obon Festival on July 18. Tom Post, Wally Kunimoto, and Joe Olson each showed a tree or two, and Carol Hicks spent the day there meeting the public and answering their questions. Here’s a picture of Carol, the trees, and a visitor (who just happens to be my wife Mirella). 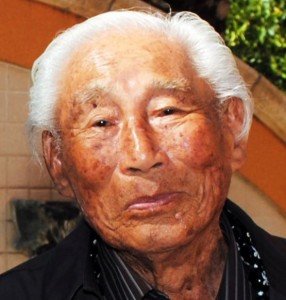 Susanne Barrymore passed on to me the sad news that well known and much loved bonsai master Harry Hirao died on July 23 at the age of 98.

He was especially well known for his California Junipers, such as the one below. 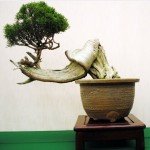 The club meets from 7-9pm on the third Monday of each month at the Arroyo Grande American Legion Hall, 417 Orchard Ave., Arroyo Grande. George Muranaka of Muranaka Bonsai nursery will be leading the Monday meetings. Club website: http://www.arroyograndebonsai.org./.